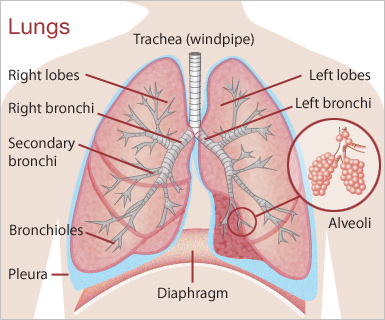 What is Lung Cancer?

Non-Small Cell comprises of squamous cell, adenocarcinoma, and large cell carcinoma. Together, these account for almost 90% of all lung cancer cases.

Around 40% of non-small cell lung cancers are adenocarcinoma, which begins on the outside surface of the lung. This form is also more likely to spread (metastasize) to lymph nodes and other organs.

In many cases, lung cancer may also spread to other organs including the brain, adrenal glands, liver or bones and cause other symptoms that prompt seeking a medical evaluation.

What are the Signs and Symptoms Of Lung Cancer?

In its early stages, lung cancer produces few symptoms and you may not be aware that you have it. At more advanced stages there are many symptoms that you may experience.

Other less common symptoms may include:-

The most common risk factor for lung cancer is smoking, which is thought to be responsible for around 8 out of 10 cases. The main risk factors are:-

Anxiety, Depression, and Stress – Managing The Trials of Life