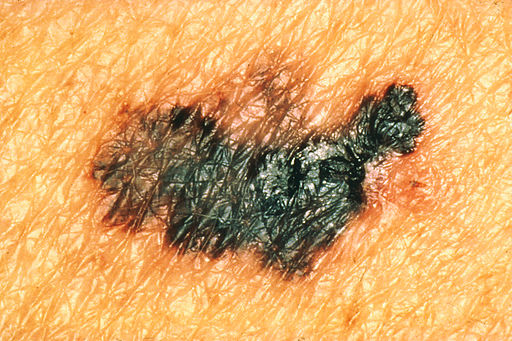 There are four major types of skin cancer and these include:

Actinic Keratosis (AK), also called a solar keratosis is described as a crusty, scaly growth that is caused by damage from long exposure to UV radiation. The skin lesion normally appears on exposed areas such as the face, bald scalp, ears, shoulders, neck, hands, and forearms.

This skin cancer usually affects fair-skinned people. It is known for its slow growth, in some cases taking months or even years to show up on the skin. With diagnosis it can be completely cured. It appears on the neck, head, and hands as a fleshy bump, red patch or nodule. This type of skin cancer is the least risky. It is highly unlikely to spread to other parts of the body.

The squamous cell carcinoma is another common type of skin cancer. It appears as a rough, red, and scaly patch on the rim of the ear, lips, mouth, and face. It is relatively more aggressive than basal cell carcinoma and can spread to other body parts if left untreated.

Melanoma is by far the most dangerous of all the skin cancers. Around 8,000 Americans die from Melanoma each year with an estimated 110,000 contracting the disease annually.

It starts in the melanocytes, commonly known as the skin cells that produce pigment. A suspicious looking mole should be taken seriously since Melanoma often appears in or near a mole. It may also appear in different colors, such as tan, brown, and black.

Signs and symptoms of skin cancer

Signs and symptoms of the different forms of skin cancer may include:

A lump, spot or mole that:

Although there are many warnings about excessive sun exposure, there is no doubt that the sun is good for us. This vital source of energy and sunlight helps in the production of vitamin D within our bodies. However, too much exposure to the sun has been linked with the development of various skin diseases such as skin cancer.

Dr. Johanna Budwig rightly viewed the sun as our friend and encouraged her patients to regularly sunbathe in order to benefit from the healthy photons that it emits.

There have been several studies that have indicated that ultraviolet (UV) radiation promotes skin cancer. For example, a study by Genome Biology that was carried out in 2015 found that sun exposure is the major cause of skin cancer. Given the risks, it is recommended that we should spend no more than 20 minutes in direct sunlight a day. If one needed to be exposed to the sun for longer, we would recommend you “cover up”, especially using a hat for the delicate skin on our faces.

As with all cancers as well, having a healthy diet and keeping our immune system strong will certainly make a difference in the development of unhealthy cells on our skin.