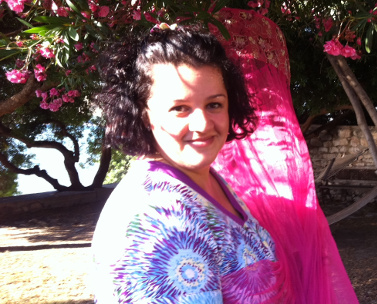 I’m a 37 year old female, married, with 2 kids. On February 8th 2013, a 5 x 7cm tumor was identified in the front right lobe of my brain, which was removed by surgery on Feb 12th 2013. The pathological test came back Grade 2 anaplastic oligoastrocytoma. I resumed my normal life after about 1 month, and every 3 months got an MRI scan. At the 9th month the MRI showed that the tumor became active and grew at a faster rate than the first one, and the degree had increased to 3.

I had another surgery on January 3rd, 2014 to remove the new tumor. After this surgery I started receiving radiotherapy and chemotherapy. The left side of my body became 30-40% weaker. I lost my hair, I started losing my balance and falling, and had difficulty walking. I was spending most of the day sleeping, and didn’t want to get up. My body was having difficulty receiving the treatments, I was losing all hope, and became severely depressed. I was taking anti-depression medicine.

I was lucky to be surrounded by a very loving and caring family. My cousin and aunt introduced me to the Budwig protocol and took me and my mother to the Budwig Center in Malaga, Spain. I hesitated at first, but once I stopped having my periods as a result of the chemotherapy, I realized there was something seriously wrong. I felt that all the systems in my body were slowly shutting down.

When we came to the Budwig Center in Malaga in May 2014, I had to get wheelchair assistance at the airport. Once the treatment began, miracles started happening immediately. According to the Vega test at the beginning of the treatment, my cancer activity level was 6 out of 10. All the procedures had an extraordinary effect. 3 days after I started going to the clinic I got my period. I no longer had water retention in my body, I had more energy, my mood became so much better and I started believing that I could fight and overcome my cancer. I decided to face and overcome a lot of issues I had for a very long time. I also saw a lot of fellow patients getting their health back during the time I was at the clinic. At the end of the 2 week treatment, the result of the Vega test showed that my cancer activity level dropped from 6 to 2 out of 10!

I didn’t need a wheelchair on the way back to Turkey. My husband and my kids couldn’t believe their eyes when they saw me at the airport. With the therapy and morale I received at the Budwig Center I was able to return to my treatment and to my life. My doctors back home also couldn’t believe the improvement.

I continued to use the herbs and homeopathic remedies prescribed to me by the Budwig Center.

My last MRI results from November 24, 2014 are so good that the several doctors and hospitals I’ve been in contact with have told me that I don’t need treatment anymore.

I owe my current condition to the Budwig Center. I will be grateful to the whole clinic staff and Johanna Budwig for the rest of my life. Since then I have been tirelessly telling every cancer patient I know about the center.

I hope to visit the center one day in my healthy state and thank everyone. Lots of love and thanks to the whole staff.