Foods To Avoid On The Budwig Diet 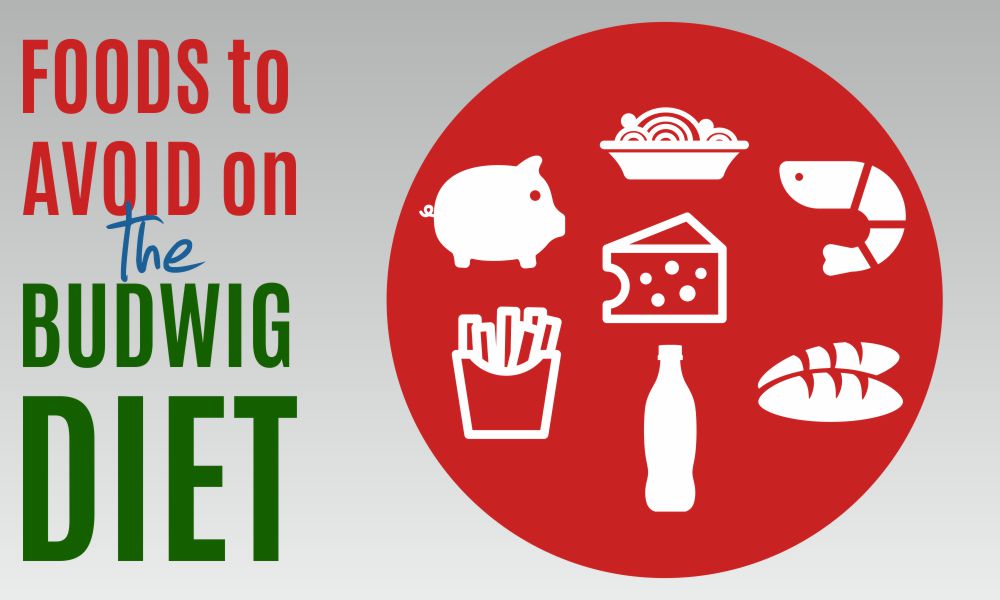 Here is a list of the foods to avoid if you are following the Budwig Diet. The information has been taken from our Budwig Diet guide which you can download here.

It is important that you are familiar with the kinds of foods that you should be eating and which foods to avoid when doing the Budwig diet. Eating the foods below could set you back and hinder your progress.

Dr. Budwig encouraged a vegetarian food plan where no meat was permitted. Please be reminded that animal toxins are stored in their fat, which is why it is best to avoid pork and cold meats. Also, many types of cold meats contain chemical additives such as nitrates.

Dr. Johanna Budwig said that red meat contributes to swelling or inflammation and she was not in favor of eating pork due to the nature of the pig’s digestive system. Pigs eat everything in sight and digest their food in approximately 4 hours, leaving a large number of toxins, which end up in the fatty tissue of the animal. Ongoing consumption of pork products has been linked to inflammation of the joints (arthritis).

Fish with fins and scales are recommended, but no lobsters, clams, shrimp, or any other fish with a hard shell.

Just as pigs (like flies and vultures) are the cleaners of the earth, shellfish are cleaners of the sea and retain a high quantity of toxins in their system, so by consuming them, you may also be ingesting heavy metals and other toxins. Eat fresh wild fish, not farmed fish.

Poultry could be eaten once a week however, make sure it’s free-range and organic. Avoid red meat that contains artificial hormones and antibiotics. Processed meats have several harmful preservatives. Obtain your protein mostly from plant sources (nuts and seeds and plant oils), organic free-range eggs, and fresh wild fish with fins and scales. Hemp oil and hemp seeds (cold-pressed) are particularly recommended because as well as containing all the essential amino acids and essential fatty acids necessary for human life, they also contain a rare protein known as globule edestin that is very similar to the globulin found in human blood plasma. Once a month some red meat from organic grass feed source would be acceptable.

NO Hydrogenated Oils and NO Trans-Fats

Regardless of the plant or seed, oils that have been refined cause our cells to suffocate. We should, therefore, avoid fried food (chicken, fries, chips, doughnuts, etc.).

Instead, cold-pressed sunflower seed oil or almost any cold-pressed oils (including olive oil) are acceptable. Virgin coconut oil is a good choice when cooking because it is one of the few oils that does not break down under higher temperatures (although if you steam your food there is very little need to heat it at higher temperatures). Those with pancreatic and liver issues may find coconut difficult to digest (Coconut oil is also helpful as skin protection when sunbathing).

White bread, pasta, and all refined cereals are hard to digest. They do not contain the nutrients and fiber needed by the intestine, and worse still, they help increase glucose levels, which also promote Candida and fungus issues.

Buckwheat was Dr. Budwig’s favorite grain and other healthy options that are gluten-free are quinoa and millet. Most patients are able to digest organic oats and brown rice as well. Spelt bread and whole-grain Spelt pasta are a better choice than wheat as many ill people have an intolerance to wheat or gluten.

Our VEGA test can determine which foods you have an intolerance to. Look for sprouted Spelt or Rye bread, as the gluten is digested in the sprouting process making the bread easier for you to digest. You can also eat whole Rye, Oat, and Multigrain bread that does not contain sugar. Sourdough bread is also a good alternative, but sprouted bread is the first choice. Corn is discouraged because of mold and genetic modification issues.

We do not use dairy products (including butter) in our diet because they contain animal fats that retain toxins and contribute towards Candida and fungus growth.

However, we do encourage consuming cottage cheese which is used in the Budwig Muesli. Occasionally some high-quality cheese (such as Emmentaler, Gesha, Gouda, Herb Cheese, Sbrinz, Camembert, Gervais, Brie) or goat cheese (2 oz) is allowed as a treat – but if you can cut it out altogether, so much the better. (For the most enzymes and nutrients, don’t heat the cheese and be sure not to buy processed cheese.)

Should be avoided, but is allowed in very small amounts on a special occasion – and on that basis, it is included in some of the Budwig recipes. Instead, make your own Oleolux.

NO chips (crisps) or Deep-Fried Foods

NO store-bought pastries (make your own with our recipes).

A fizzy (soft) drink can contain up to 10 teaspoons of white refined sugar. Similarly, avoid fruit juices from concentrate which also has high sugar content and no remaining vitamins. You can make a refreshing drink in the summer with sparkling water, fresh fruit juice, and ice.

Make your own healthy Budwig Ice Cream instead. Many commercial ice creams today are simply chemical concoctions presented in appealing packaging designed to sell a product that is not fit for human consumption. Everything from hydrogenated oils, high fructose corn syrup, and dry milk solids are used to produce something still allowed to be called ice cream.

Some pretty frightening sounding chemicals like carboxymethyl cellulose, butyraldehyde, and amyl acetate are additives in some commercial ice creams. Diethyl glycol a cheap chemical used in place of eggs is also used in anti-freeze and paint removers. Aldehyde C-17, flavoring for cherry ice cream, is an inflammable liquid used in dyes, plastics, and rubber. Piperonal, used in place of vanilla, is a lice killer. Ethyl Acetate, a pineapple flavor, can also clean leather and textiles and its vapor has been known to cause chronic lung, liver, and heart damage.

NO Sugar or Molasses

Dried fruit, fresh fruit in season, as well as raw honey, are all acceptable options of sweet-tasting food.

It does not take very long for the taste buds to stop craving sugar, but if you must have something sweet, Xylitol (only use Xylitol made from birch trees) or liquid Stevia are good options. (Stevia in powder form is sometimes mixed with other artificial sweeteners, so be careful).

NO Soy Milk or Soy Products

(Except for a little natural fermented soy sauce, or as a temporary solution if you are intolerant of cottage cheese in the Budwig Muesli). Many of the soy products available in the West have been treated with harsh shortcuts and are genetically modified. They can have suppressive effects on the thyroid and, by extension, the immune system. They contain significant amounts of glutamate and have effects similar to MSG.

Even traditionally-fermented soy products have a downside and are linked to various forms of neurological atrophy. Broad-based population studies in China have indicated an increased incidence of Alzheimer-related syndromes in populations with the greatest consumption of soy. In addition, the phytic acid in soy can chelate (remove) calcium from the system. Soy is also a thyroid inhibitor.

They contain unhealthy quantities of salt, sugar, and preservatives.

Note: This post was originally published in December 2017 and has been updated for freshness, accuracy, and clarity.